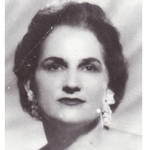 Emma T. Kelly (1918-2001) was a native of Statesboro, Georgia and was made internationally famous as the "Lady of 6,000 Songs" in the book "Midnight in the Garden of Good and Evil." The George R. and Emma T. Kelly Scholarship is named in her honor.

Emma T. Kelly was awarded an Honorary Doctorate of Fine Arts by Georgia Southern University in 1999.