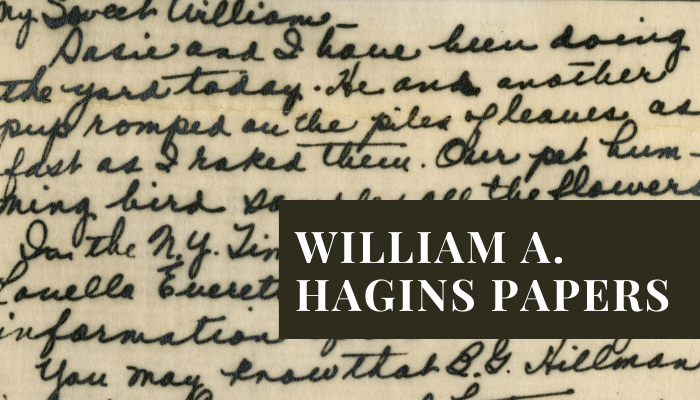 This collection contains the papers of William Archer Hagins, Sr from 1940-2005. Included within the collection are written letters, v-mail, military, and legal documents concerning Hagins’ service in the United States Army during World War II.

William Archer Hagins Sr. was born on August 8, 1888 in Halcyondale, Screven County, Georgia. In his adult life, he joined the United States Regular Army as a medical officer in the Medical Corps. During World War I, he was deployed to France with the American Expeditionary Force as a First Lieutenant. He received a citation for distinguished and exceptional gallantry at the Battle of Soissons on July 18, 1918. During World War II, he continued his military service, where he was promoted to be the Assistant Surgeon of the U.S. Third Army. In late 1943, he was promoted to be the Chief Surgeon of the Southwest Pacific Area under the command of General Douglas MacArthur. In 1945, he was promoted to Brigadier General, where he continued his Pacific Theater service. He participated in the Occupation of Japan, and was returned home as part of Operation Magic Carpet on the U.S. Navy battleship U.S.S. New Jersey (BB-62). Hagins retired from the U.S. Army in 1948 and died in 1980 at 92 years old. He is buried in Bulloch County.

For more information about this collection see the William A. Hagins Finding Aid