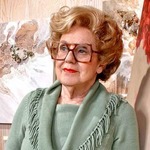 Betty Foy Sanders (1927-2022) was born in the farming community of Adabelle, Georgia, just outside of Statesboro. She began her college career at Georgia Southern before transferring to the University of Georgia, where she studied fine arts. That is also where she met and married Carl Sanders, the future governor of Georgia. Foy Sanders served as the First Lady of Georgia from 1963 to 1967. While in office, she helped create the Georgia Council for the Arts as well as assisting in the design and construction of the Governor’s Mansion.

She established the Betty Foy Sanders Georgia Artists Collection which is on permanent display at the Center for Art & Theatre on Georgia Southern’s Statesboro Campus. This collection curates notable works based on their association with Georgia and includes her own painting, Coastal Sand Dunes. The Betty Foy Sanders Department of Art on the Statesboro Campus of Georgia Southern University is named in her honor.

For more information about Betty Foy Sanders visit https://cah.georgiasouthern.edu/art/about/betty-foy-sanders/ at Georgia Southern's Department of Art or her obituary.

Photo Courtesy of the Statesboro Herald.